I’ve mentioned before that I’m currently neck-deep in a two-year theology program (“seminary for lay people” is how it’s described). Probably one of the most shattering ideas I encountered was in the Bibliology and Hermeneutics class, when the program’s teachers were talking about how many/most evangelicals approach the Bible: they treat it like a “magic book.”

At first, I wasn’t entirely sure what they meant, but as the course went on I realized that there was something stopping me from understanding it:  I thought of the Bible as a magic book. It was an embarrassing realization at first, because I have an MA in English!* I know how to read books! And once I started seeing the Bible as a library, and each book it contains as a whole book instead of something I could chop up into soundbites (seriously, the more I think about how I used to do that, the more and more it feels insane and ridiculous) … I started realizing that my understanding of the Bible being “inspired” or having “divine authorship” had twisted the Bible into something it can’t possibly be.

I’m not trying to say that there’s no possible way the Bible could be “God-breathed,” I’m just not entirely sure what that means. All I know is that being “God-breathed” doesn’t make the Bible immune to the sorts of problems that all other books have– especially books written thousands of years ago.

But, the most dominant way of interacting with the Bible in American culture is the evangelical way. There’s a huge breadth of ways on how to interact with the Bible, especially in the Mainline Protestant denominations, but, unfortunately, those aren’t the ways that most Americans seem to see. When they see Christians interacting with the Bible, they see, largely, people quoting individual verses and occasionally twisting those verses so far beyond their context that they take on a new life, new meaning, of their own. They see Christians walking around with signs that have individual verses slapped on them about drinking, or homosexuality, divorced from their books and the overall argument of their writer. They see us celebrating Tim Tebow and John 3:16. They see references and not their corresponding verses on our bumpers. They hear us casually sprinkle our conversation with half-remembered phrases.

During my Christmas vacation, I was hanging out with a few friends who are not particularly religious. One of them laughingly threw out a phrase that I found hilarious considering it was a Bible verse (“the time has come to set aside childish things”)– and when I laughed “nice Bible reference!” he just sort of  . . . stared.

“That’s from the Bible?”

It was my turn to stare, although I wasn’t starting at anyone in particular. I was just suddenly struck by the number of phrases and sayings that come from Scripture that are now American cliches … except no one has any idea where they come from. Considering the influence the Bible has had on American rhetoric, it’s not surprising that our language is littered with biblical phrasings, but it bothered me because I realized that this isn’t much different from how Christians treat the Bible even when they know they’re quoting from the Bible.

It’s continued to bother me– at times, it outright irks me– as I traverse the internet. I’m a loyal reader of a few non-theist and atheist blogs, and when I’m feeling brave enough to wade into the comment sections, I see this happen over and over again. A Christian and a non-theist/agnostic/atheist get into a debate, and they start throwing Bible verses at each other. Usually it’s the non-theist that starts quoting specific verses, and then the Christian responds with arguments so tired they practically whimper– and they usually have something to do with “you have to take those verses in context!” And it irks me because I feel sure that this earnest Christian probably rips verses out of context on a daily basis– they’re just not usually from Numbers 5.

After the Phil Robertson/A&E/Duck Dynasty debacle, I saw a meme pop up in my facebook feed:

And it just made me shake my head (even as I chuckled) because they’ve done exactly what Phil Robertson did in his original interview– took a verse out of context and even paraphrased it a bit. For starters, Leviticus 10:6 is specifically addressed to Aaron and his sons, Eleazar and Ithamar (and, possibly by extension the Levites), so this is one of those times when a commandment is definitely limited and not meant to be applied to all of humanity— or even the Jewish people, for that matter. But, Robertson was also ripping I Corinthians 6:9-10 out of context and divorcing it from any historical context (not that this is his fault, he was just parroting fundamentalist/evangelical interpretations). ἀρσενοκοίτης, literally meaning “man beds” is a complicated word with an interesting history, and forcing it to mean “homosexuality” when its most common historical meaning was the enslavement and purchase of temple prostitutes is… well, wrong.

But we (evangelicals) do this all of the time.

And we dare to get frustrated when someone on the internet starts doing the same thing to the Bible that we’ve been doing for a hundred years? We dare to become angry with those who learned how to treat the Bible from us and are shocked and dismayed when they are merely modeling how they’ve been shown the Bible is to be treated?

For the last hundred years or so fundamentalism and its daughter evangelicalism have fervently sought to have a “high view of Scripture,” to defend its status as inspired and inerrant. But, in discussing these concepts, one of the common results has been to see the Bible as inherently magical. It’s ceased being a book– it’s become a tool, a sword,  and many Christians have used it to “divide asunder” all sorts of things, including ourselves.

*(full disclosure: I still have to learn French in order to get the degree. I’m working on that.) 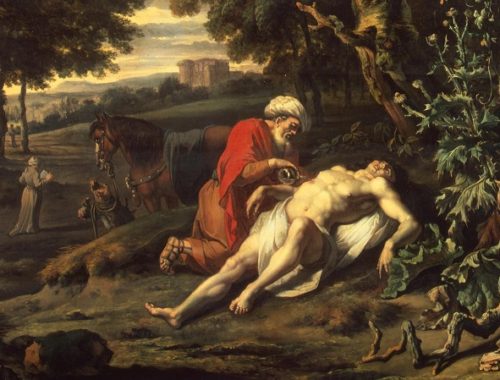 The Parable of the Good Samaritan, revised

hoping to help bring change at church, part one