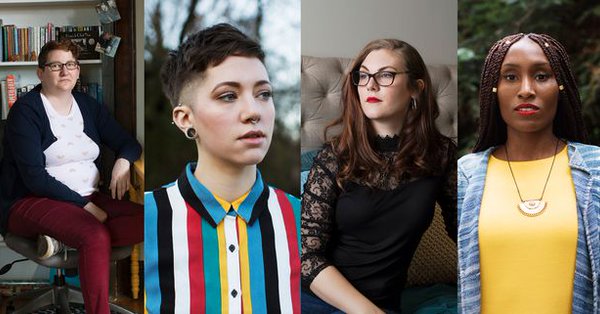 Something that has been gently simmering away on the back burner of my life for a good long while is an article that dropped this morning, and one I’m proud to be a part of.

“Inside the Scam of the Purity Movement” by Sarah Stankorb, in Cosmopolitan Magazine.

Sarah is a writer I’ve been in contact with for several years at this point– I appeared briefly in another article she wrote for Marie Claire covering the stay-at-home-daughter movement. She’s done a lot of work to understand the point of view of those of us who have survived these cultures, and I have a lot of respect for her. You should absolutely read both these pieces– “The Daughters Great Escape” is just as good.

I do have two notes about the Cosmo article. The focus of the piece changed a little bit after our first interview back in November– our first conversation centered on the way that my experience and Harris’ experience overlapped, and why it’s not a coincidence that I Kissed Dating Goodbye was written by a homeschooler (about half of the top 12 purity culture books are written by homeschoolers, and we’re only 2% of the population. That’s a huge over-representation.)

In that interview, I talked a lot about how purity culture can trace its ideological heritage straight back to white supremacy, a fact I bring up every time someone asks me about purity culture because they can’t be separated. Purity culture’s roots are buried in the murk and mire of how white supremacy codifies bodies as “clean” or “unclean,” or “pure” and “sullied.” White bodies are good, pure, chaste and maintaining that state is of absolute critical importance– we must not taint our bodies with the “filth” of sexual sin or miscegenation. Black bodies are beyond redemption; black men are viewed as inherently sexually ungovernable and black women have no right to autonomy over their sexual and reproductive lives. This is a critical piece of purity culture that somehow always gets overlooked by editors when they decide to run a piece on it (insert eye roll here).

The second note I’d like to make is that, probably due to length constraints, one of the nuances of my story gets a little muddled in this paragraph:

Samantha Field, now 31, describes staying with a sexually abusive partner for years, believing that because they’d had sex, she was “disgusting garbage” that no one else would want. “I have to constantly fight against the lie that because I wasn’t pure enough, that because I had ‘dressed provocatively’ and allowed myself to be alone with him, that I invited it,” she wrote on her blog.

I did not have sex. I was raped. However, being a rape victim in purity culture made me unable to identify that what was happening to me was rape. I even verbally said no and physically resisted during one of the assaults and still did not understand that he was raping me. I was responsible for anything that happened to me– I must have incited his “lust” in some mysterious way (rape is about power and control, not arousal). I was alone with him, so of course anything that happened is my fault. It took me literally years to figure out things like “no means no” because of how badly purity culture damaged my understanding of consent.

I’ve written about this a bit. The post the Cosmo article references is this one, “How Purity Culture Taught Me to be Abused,” and I’ve also covered this for Rewire: “Purity Culture Itself is the Problem.”

Anyway, that’s a critical part of my story of surviving purity culture, and it’s a common thread among those of us from purity culture who are sexual abuse victims, and I just want to make sure that it’s a part of any conversation we have about it.

Many of the people in the article are my friends and colleagues, as well, and you should 100% check them out. I met Linda Kay Klein a while ago, and she invited me to speak on the white supremacist origins of purity culture at a gathering she hosted last spring. Her book, Pure, is fantastic and you should absolutely read it. Dianna Anderson wrote Damaged Goods and Problematic, and is as amazing in person as she is on twitter. Emily Joy is one of the fiercest, most badass people I know and I have loved all the work we’ve done together (the article mentions #IKDGstories, but we also covered the disastrous #GC2Summit a few months ago). I don’t personally know Lyvonne, but her work is definitely worth a look.

Photography by Angie Smith, who was absolutely wonderful, and owned by Cosmopolitan.