Every once in a while, someone I know on Facebook will share a joke or a meme that makes me grit my teeth because it makes me feel dismissed. Most recently it was this one: 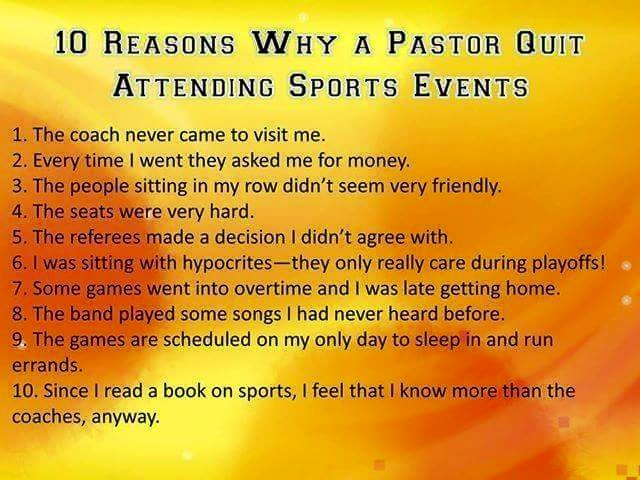 I’m sure we’ve all seen these sorts of things before, or heard something similar from a pulpit. If I had a dollar for every time I’ve heard a pastor talk about “some bitty that got her feelings hurt because ‘the pastor didn’t shake my hand!’” I’d be rolling in money. These “jokes” have always made me wonder if I was really just that out of touch– am I missing some huge exodus from church because the pews are too hard?

So, I reached out to a few groups, posting this meme and asking if they’d stopped attending church for one of the listed reasons. I also posed a similar question on Twitter:

Poll: if you used to attend church regularly, but don't attend anymore, what made you stop? (For a blog post)

The responses I got back were heartbreaking. They shattered me all over again because they echoed the pain I felt on being forced to realize that church is not a safe place. I used to finish that sentence with “for me,” but sometimes, I drop the modifier. I know it’s possible for people to find a safe haven in church even though they’ve been hurt by it before, but I don’t think it’s overly dramatic to say those people are finding safe places in spite of American church culture.

The reasons I got back from people fell under a few significant headings, which are in no particular order below:

The constant homophobia and mistreatment of queer people.

For some it was because a friend or family member was excommunicated for their orientation; for many others it was because they themselves were queer and were demonized by their church. In my own case, I was constantly correcting the pastoral staff at my last church for misgendering the trans people who attended, but they outright refused to listen.

Frequently associated with this was the not-so-implicit expectation that everyone in the church be a conservative Republican. I’m not a fan of any politics being preached from the pulpit, conservative or liberal, but in America the dominant narrative in our churches is conservative. Tied into all of this is the common belief in American Exceptionalism and nationalism– that American patriotism is a part of being a Christian.

This is the one that really broke me. I was flooded with stories of child sexual abusers being given leadership positions and subsequently using their power to attack more children. There were hair-raising instances of church leadership point-blank lying to members asking about the safety of a convicted sex offender who went on to rape multiple women in the church. I heard about pastors being shuttled around denominations where they would continue to assault new victims. One person recounted a story of how a child was sexually assaulted by one of the Sunday school teachers, and while the child was denounced from the pulpit, the teacher escaped any consequences. This should never happen, but it does, on a level that feels almost routine.

The church refused to accommodate, understand, or show empathy to those with disabilities.

Most often I heard this from people who have autism, or are the parents of children with autism. Children with autism, or a sensory impairment of some kind, especially suffer in church, and the reactions of church members was to shame and ostracize the parents of those “spoiled rotten brats.” I know that, for myself, I couldn’t participate in church service because there was nothing for someone who wasn’t able-bodied to do. One person said that their allergic reaction to perfumes was treated like a joke.

Women are treated as less than men.

This was the biggest reason why we left our last church. They wanted to have their cake and eat it, too, and refused to even consider the idea that silence in the face of oppression is wrong. Many people talked about abusive relationship dynamics being endorsed from the pulpit or in private counseling sessions, of blatant misogyny in the sermons every Sunday, of being refused to use their talents and gifts to serve because of their gender.

The church did not care about the community.

This was one of the more repeated reasons, and I know it was something that annoyed me about the last church I attended. There was plenty of money for bulletins and pens and donuts and coffee and giving away flat-screen TVs and putting on lavish Christmas spectacles, but less than 10% of the budget was dedicated to helping either church members or the community. How many churches have I been in that had a coffee shop in the lobby but it had never occurred to them to have a soup kitchen?

They had experienced spiritual abuse.

Many couldn’t experience a church service without experiencing flashbacks and panic attacks. I’ve had to leave many a service because of a trigger. For those of us who have experienced Religious Trauma Syndrome, we’re more aware of the ways that pastors can abuse their authority. The first red flag I got at my last church was that the pastor was completely unaccountable to anyone. Supposedly the staff was in place to help keep him in check, but they were far more interested in defending his terrible behavior than they were in addressing it. For a long time I thought I was only reacting to ghosts from my past, but over time I realized that wasn’t it. I was reacting to my past being repeated. For many who shared their stories with me, this was often the case. They recognized the red flags and couldn’t stay.

In doing the research for this post I googled “stupid reasons why people leave the church,” and, sadly, I wasn’t disappointed by what turned up. Among the 24 million results there was “7 Really Dumb Reasons to Leave a Church,” “5 Stupid Reasons People Leave the Church,” and “3 Stupid Reasons Millennials are Leaving Churches.” I read through maybe twenty different articles on the subject, and I realized that many of these pieces are actually including the list I’ve given above. Except, to these people, it’s described as “being offended,” or “disagreeing with the pastor,” or “they want so-called freedom” or “their feelings got hurt.”

It’s not that the people who make these memes or write these posts are unaware of the reasons I gave here, it’s that they don’t think these reasons are legitimate. The unending putrid tide of misogyny and homophobia? Just us “being offended.” Thinking that nationalism should not be a part of Christianity? We’re just “disagreeing with the pastor,” (which, in the meme above was given as “reading a book makes me more of an expert than the experts”). Try to explain to a staff member that what the pastor just said was narcissistic or abusive and we just “got our feelings hurt.”

They look at people like me, like the hundreds of people who shared their experiences with me, and they see “7 Stupid Reasons to Quit Church” instead of listening to the pain and horror in our voices.