And we’re jumping right back into the Radical review. After I did the introduction and first chapter, I tweeted something about how the subtitle should have been “I take hyperbole literally,” and after reading through the second chapter again (titled “Too Hungry for Words: Discovering the Truth and Beauty of the Gospel”), I’ve realized it’s not just hyperbole. It’s everything. David takes everything as literally as possible.

I have the tendency to interpret things overly literally, especially when I’m tired, and even I can recognize sarcasm, hyperbole, metaphor, and the distinctions between exposition and poetry. Like, look at this:

Jesus told us everyone who sins is a slave to sin, and Paul went so far as to say that we are captive to the devil himself. (31)

Honestly, fellow, if you have to premise something with “they even went so far as to say” maybe, just maybe, you should take a step back and ask yourself—if they’re really going so far, do they mean it literally?

David also has a pretty serious problem with taking his own understanding of Scripture and elevating it to something pretty close to Scripture itself, and that’s me being generous. There’s this:

We are each born with an evil, God-hating heart. Genesis 8:21 says that every inclination of man’s heart is evil from childhood … (30)

Why is [Jesus] in such agony and pain [at Gethsemane]? The answer is not because he is afraid of the crucifixion. He is not trembling because of what the Roman soldiers are about to do to him … (34-35).

Three things: first of all, if the verse you’re about to quote says “the imaginations of a man’s heart are evil from his youth,” running around making the claim that means we’re all God-haters from the moment we’re born doesn’t make much sense. Second, while it’s entirely likely that Jesus was also worried about whatever is in the Cup he’s asking to be passed, it seems dismissive and uncompassionate to point-blank declare that Jesus wasn’t afraid of the crucifixion. Jesus was human like as we are. Assuming he couldn’t possibly be afraid of the coming crucifixion (35) seems just a touch Arian to me.

The third and last is that David is a pretty committed Calvinist, and he’s refusing to even acknowledge that there are other approaches to Christian theology. According to him, he lays awake at night terrified for all the people who aren’t an avowed Calvinist like he is. To him, everyone who isn’t a Calvinist is completely and utterly wrong and we will die in hell.

He does this sort of thing throughout the book, and it never ceases to be frustrating. I’ve never been impressed by men who are this arrogant.

The second biggest problem I have with Radical he also introduces in this chapter: asceticism. If you’re not familiar with asceticism, it’s typically a religious attempt to abstain from indulgences or pleasure. There are varying degrees of this, ranging from things like Lent to wearing a cilice and whipping yourself. In my case, it showed up in things like my Sunday school teacher telling me to wear uncomfortable shoes in order to “mortify the flesh.”

In many respects, Radical is a modern argument for Christian asceticism. If David wasn’t so virulently Protestant he’d probably have realized he’s really just recycling St. Francis of Assisi and stopped writing the book. Here, he questions music, padded chairs, air conditioning, decorations, and a bit later on, even sermons (27, 40).

Why all of this bothers me is that it has gnostic overtones. When we buy into a harsh divide between our souls and our bodies, it’s easy to take some passages from the Bible and make them be about all bodily impulses as being evil and corrupted. There’s a long tradition in Christianity of sexual abstinence—in fact, it’s possible that at least one of the early church fathers castrated himself (Origen, according to Eusebius). Even if they didn’t go as far as castration, you can see the leftover movement in the modern Catholic requirement for priests to abstain from sex and marriage.

The problem is, this leaves out things like other Scripture passages (like Paul’s instruction that we sing psalms and hymns in Ephesians), and ignores the fact that the Christian religion is one very much concerned with embodiment. Jesus is God made flesh, God with us, Immanuel. The two sacraments we all agree on—the Eucharist and Baptism—are fundamentally about recognizing that our bodies and our souls are inseparably the same, and that spiritual acts are physical ones and vice versa.

In my opinion, arguments for asceticism—whatever religious or secular place they come from—always ignore this reality, and arguments that ignore reality can’t be successful. I’m especially sensitive to this as a chronic pain sufferer—take away indoor heating and padded chairs and I’m unable to come to your church service. Make church services last six to twelve hours like what he talks about here and I will not be able to fully participate in your church.

The third and last significant problem with this chapter is that he’s very much of the “Christians talk about how God is love too much, we need to focus on how God is wrathful and hateful and a holy judge” persuasion. Like here:

Yes, God is a loving Father, but he is also a wrathful Judge … And in some sense, God also hates sinners … On psalmist said to God, “The arrogant cannot stand in your presence; you hate all who do wrong.” (29)

Leaving aside for the moment that the psalms are poetry and therefore treating an outpouring of a psalmist’s emotions as literal factual truth about the nature of God themself is more than a little ridiculous, let’s take a crack at his “God is also hateful and wrathful” assertion. He positions their wrath as being in tension with their love, as though God’s love and wrath are opposites. I’d like to posit that they are not opposites, but that one results from the other. God is wrathful because they are loving.

This springs from my understanding of the context—if you examine almost every time that God is being portrayed as wrathful, it is in response to someone being oppressive. In almost every case it’s the Israelites doing things like refusing to observe the Year of Jubilee, like in Amos. Supposedly God gave them every opportunity not to turn into an oppressive Empire that preferred the wealthy and powerful over the poor and needy, and they took every opportunity to become precisely that. And when that happens, the prophets and the psalmists spend a lot of time condemning it, writing about how they believe God feels about it, too. According to them, God’s usually pretty upset and for good reason.

During Jesus’ ministry, it seems he spent most of his time addressing the injustices he saw. He fed the hungry, healed the sick, lifted up the poor in spirit. The times he’s shown as angry are in reaction to the elite using their positions to abuse those below them—like the moneychangers in the temple, or the Pharisees giving their followers a “back-breaking burden.” Jesus loved, and because he loved, he grew wrathful when he saw oppression and injustice.

But, according to David, God is wrathful, and because someone thousands of years ago sinned, we’re all born completely and totally evil – “you are an enemy of God, dead in your sin, and in your present state you are not even able to see that you need life” (32)—and Jesus had to bear all the fury and wrath “stored up from the beginning of the world” (35) in order for God to be able to come down from his mountain again (33) and tolerate being around us.

Just … is God actually that petty?

There are a few things in this chapter that I could almost agree with him on, like his rejection of a “superstitious sinner’s prayer” (37). I’ve even compared the sinner’s prayer to a magical incantation, so obviously this idea is something we both dislike. But we almost immediately diverge from each other, because he’s a Calvinist and I’m not. He’s still viewing Christianity in terms of saved and unsaved and I’ve moved past that to being a Christian means following Christ.

Maybe somewhere in this book we’ll fall more in step with each other. I doubt it. 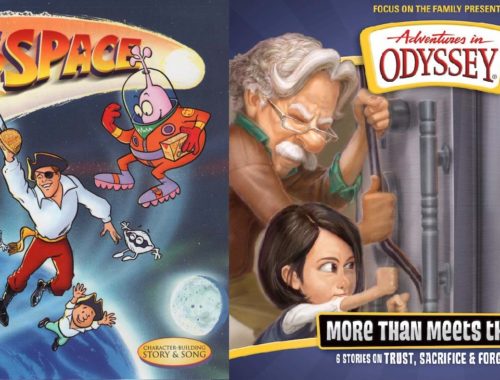 Patch the Pirate vs. Adventures in Odyssey: A Metaphor