the New Testament: context and story

Growing up, there were a few things I understood about the Old Testament, although the ideas were inconsistently applied and various preachers and sermons could throw all of these principles out of the window on any whim.

First, I knew that there was a difference between “Ceremonial Law” and the “Moral Law,” and that Jesus had re-established the “Moral Law” in places like the Sermon on the Mount, so that’s why we still think the Ten Commandments are valid, but we like eating shrimp and bacon. Because of teachings like this, I knew that a significant portion of the Old Testament did not apply to my life, and had to be understood as a part of Israel’s history. The “Law,” the word we used for everything that wasn’t the Ten Commandments or a story or a prophecy, applied only to Jewish people and only up until the moment Jesus died.

Second, we were taught that the reason we admitted the Jewish scriptures into our Christian cannon was that the Old Testament clearly pointed to the coming of Jesus, the Messiah. It would be impossible to truly understand the mission and purpose of Jesus’ life and earthly ministry without the context of the Old Testament. The writers of the New Testament were also almost entirely Jewish, and referenced the Old Testament frequently in their work. In order to understand what they were talking about, we’d have to be able to follow their allusions and references.

Third, the Old Testament is largely devoted to stories. There’s a few books scattered throughout that have very little narrative, but most of the books are interested in conveying history and parable. We believed that God had given us these stories to illuminate his character and to show us what we are are to do– and not to do. We were to draw larger lessons and morals out of these stories, and what the lesson could be was flexible and contextually based; a single story could have multiple meanings, and that was part of the beauty of Scripture (that this is inherently a post-modern understanding of literature and story . . . yeah, no one mentioned that).

Lastly, the most important thing we had to keep in mind about the Old Testament was that it was very old and you had to be careful with how you went about trying to interpret it. Knowledge about ancient history was important, because you had to be familiar with the cultures and religious practices that the stories talked about. I was given a lot of tools to help us read the Old Testament– maps and glossaries and reference manuals and concordances and chronological histories and lexicons– and told that we had to use them in order to be “rightly dividing the word of truth.”

But it occurred to me the other day that hardly any of those things were true when it came to the New Testament. I was halfway through college before I ever used a Greek lexicon in order to look up the meaning of a word (“touch” from I Corinthians 7:1. It’s ἅπτομαι, in case you were wondering, and its root meaning has something to do with “to set on fire.” That was a crucial part of a discussion I was having).

When we read the New Testament, we were reading for things like “the plain meaning of the text,” and doing our best to take the King James English translation at face-value. We didn’t really throw around statements like “the Bible says it, that settles it,” unless we were using a passage from the New Testament– and probably just the Pauline epistles, since the Gospels got left out of a lot of conversations. In retrospect, I think that Jesus was just a little to commie/free-love for my conservative community.

It’s taken me a long time to really wrap my brain around the fact that I am just as removed from the culture, tradition, and ideologies that the writers of the New Testament were operating with as I am from the writers of the Old Testament. Heavens, the New Testament is almost two thousand years old. If we were reading anything else from the Middle East and the Roman Empire written around the same time, there would be all the glossaries and maps and lexicons all of the time. Instead, we would sit down with our translated-from-a-language-we-don’t-speak-by-people-thousands-of-years-removed-from-its-history and it didn’t phase us.

I’m not entirely sure why this happened, but I think it might have something to do with the fact that the New Testament is largely propositional statements and arguments. We get some of the richest, most meaningful stories in the entire Bible in the shape of the Gospels, but we rarely ever study them the way we go through Galatians or Revelation. Instead, those stories and parables are ignored in favor of what appear to be “plain English” statements about women being silent and forsaking not the assembling of ourselves together.

Over the last couple of years, I’ve come to view the Bible principally as story, and not in the sense that I think it’s fiction. In graduate school, I was in a lot of discussions about the meaning and power and beauty of “story,” and how we use narratives to shape our lives and help us understand our world. I don’t think the Bible is any exception. And, just like I would study any piece of literature, I try to understand time and place and culture and the possible experiences of the author (if we know who that is, which, shockingly (at least to me), we don’t for most of the NT books). 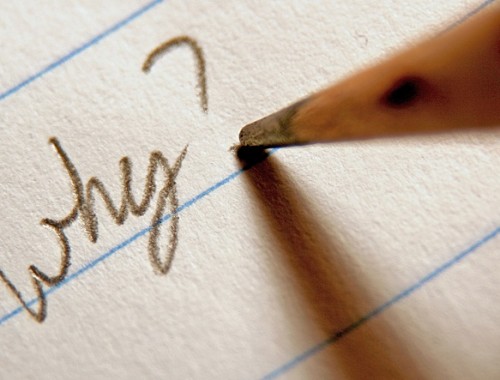 Christian fundamentalism is about avoiding questions

learning the words: on fire