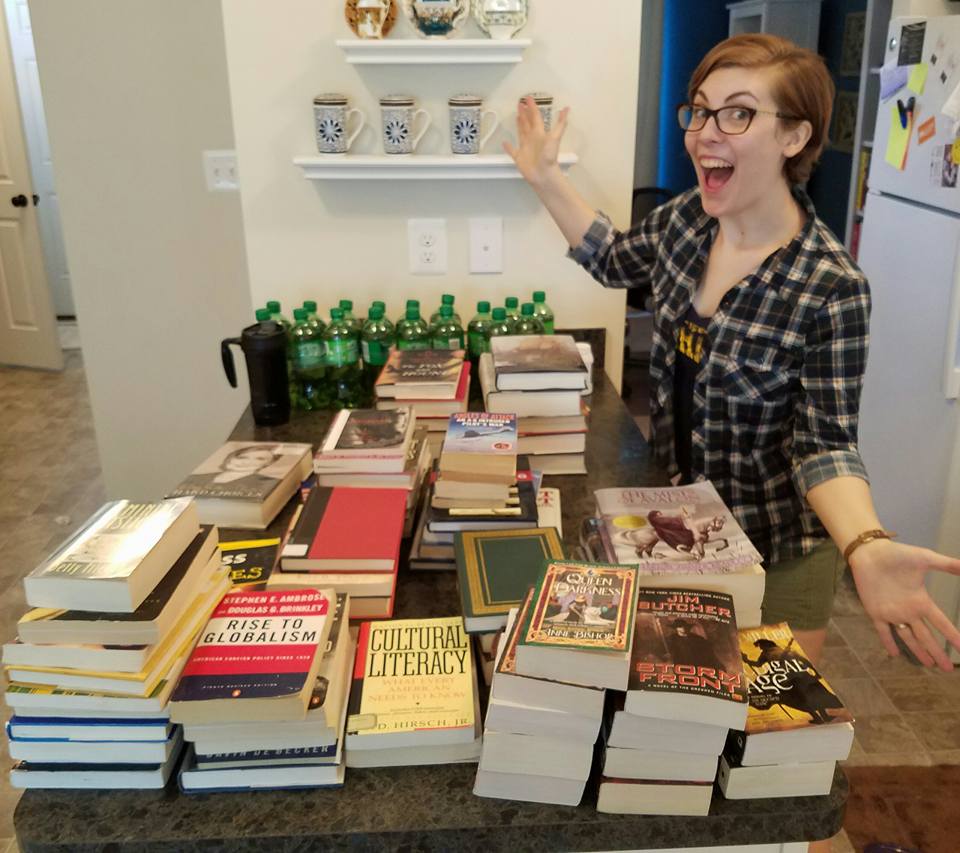 stuff I’ve been into: June edition

The picture for this post is of the book haul Handsome and I brought home from our county library book sale– which is “The Event of the Year” as far as anyone down here is concerned.

I’m a big fan of the Washington Post— I read it fairly consistently, and I love that they run pieces like “For the poor in the Ivy League, a full ride isn’t always what they imagined” by Nick Anderson fairly often. This one was especially good because it puts to bed the tired argument that minority/poor students can just “get scholarships” to solve their problems. Sure, you might have your tuition covered, but that doesn’t necessarily mean you can buy food, or textbooks. Heaven forbid you want to major in a STEM field, where the textbooks are constantly updated and can cost hundreds of dollars.

I’ve been reading the blog-zine Women in Theology for several years, and I recommend them in general– they’re one of the reasons why I’m going to seminary. “A Reasonable Violence: Why the Third Way is the Worst Way” by Amaryah Shaye is a good example of the work they do. I’ve shared my own opinion on the “Third Way” perspective before, and Amaryah’s argument, I believe, is incredibly compelling. I kept wanting to grab a few pullquotes, but all of it is just too good.

My friend and colleague, Sarah Jones, wrote “The Strange Story of Sewanee, the KKK, and a Franklin County Gay/Straight Alliance” for Scalawag and it’s fully worth a read. bell hooks first coined the phrase white supremacist capitalist cisheteropatriarchy — and while it’s certainly a mouthful, it elucidates the reality we all unthinkingly live in: that misogyny, racism, homophobia are all tied up in each other. Each oppressive system perpetuates the others.

“This is Why we have Women-Only Spaces, and I Don’t Want to Hear Your Complaints” by Clementine Ford wrestles with the impossible-to-meet demands women face that constantly contradict each other. I think the thesis of her piece is here:

The only conclusion I’ve been able to draw from this is that women, despite being constantly told what we MUST do to avoid danger, are actually not allowed to be in control of what those preventative actions might look like.

Bust can be a hit-or-miss feminist magazine for me, just like Jezebel and a few others– but “Why ADHD is a Feminist Issue and What Happens when its Overlooked” by S.B. Casteñeda is short, but excellent, and is a good introduction to this issue. Girls also tend to be under-diagnosed for a lot of things, like autism, and we need to keep demanding that the medical establishment corrects its misogynistic bias.

“The Reluctant Memoirist” by Suki Kim is probably one of the best things I’ve read this month. She’s an investigative reporter, but yet when she tried to share her investigative journalism on North Korea — one of the most badass things I’ve ever heard of — it got billed as “memoir.” Argh gablargh. Anyway, you should read it. She’s a lot more eloquent than “argh gablargh.”

Bitch magazine, unlike Bust or Jezebel, is a publication I have a lot of respect for. When I saw that Kameron Hurley– one of my favorite authors– seriously, go read The Mirror Empire right now–had written “In Defense of Unlikable Women” for them I squeed. It’s one of the essays from her book The Geek Feminist Revolution which I’m going to buy as soon as I’m able. Two of her women characters in Mirror Empire are everything she’s arguing for in this piece, and they’re some of the best-written “unlikable women” I’ve ever encountered in literature. If you think I’m trying to get y’all to become Kameron Hurley fans– you’re right.

As I mentioned above, I brought home a literal trunk-full of books from our library’s book sale, and I’ve been tearing through them. I picked up The Magician’s Apprentice by Trudi Canavan and enjoyed it so much I bought her other two trilogies in the same universe– The Black Magician trilogy and the Traitor Spy trilogy. She has an interesting plotting style, and I enjoyed the pacing of her books. Traitor Spy has a bisexual woman and a lesbian as two of the main characters, and they get a happy ending. No Bury Your Gays here. Black Magician has a side-ish/main-ish character who realizes he’s gay toward the end, and he become a main character in Traitor Spy, and wheeee I’m so happy when I read books that resonate with my lived experiences. Made me realize how tiring it can be to read about exclusively straight characters the rest of the time.

I also grabbed all of Karen Miller’s books from the Kingmaker, Kingbreaker universe. She’s a genuinely good fantasy writer, and I’m really enjoying them, but I do have one complaint: in a world where the main religious icon is a woman, you’d think there’d be other women in the books. There’s four women total in The Awakened Mage. Innkeepers, servants, stable hands, secretaries, guildmasters, guards, teachers … they are all men. The only exception is the queen, the princess, one woman who shows up for a few pages during a court hearing, and the main character’s friend. It’s frustrating that even in a fantasy novel written by a woman, the male gender is treated as the default.

I also read The Black Jewels trilogy by Anne Bishop in basically a single sitting because I’m a complete sucker for books written about insanely powerful women; but, I will warn you that while the second two books are decently entertaining, there is a lot of sexual violence in the first book– Daughter of the Blood. And I mean a lot– against women and men and the main character, who’s a child in the first book. It’s a complicated system to explain, but there’s a lot of gender essentialism and then there’s the interesting little factoid that a woman can be “broken” on her “Virgin Night” and lose her magical powers. The same is not true of men, although I think this might have been Anne’s attempt to balance out the fact that women tend to be magically stronger than the men. But …  bleh. Anyway, truly entertaining books and I liked how they referenced vampires and gargoyles without specifically invoking those archetypes … but yeah. Complicated feelings. The next two books respond to the sexual violence the main characters endured delicately and appropriately– Anne doesn’t ignore the trauma or its consequences, and there’s an organic healing process, but, like I said … it’s complicated.

I also read the Selection series by Kiera Cass, which is in that young-adult dystopian genre with the interesting twist that it’s about royalty. Again, I’m a sucker for princess-themed books, so I read them all. Not the best in the genre I’ve read, but cute. There’s four books and I think it probably should have just been two, but I understand the rationale of stretching it out a bit for younger readers.

I’m throwing a barbecue this weekend that I’m very excited about– hence why you’re getting a “stuff I’ve been into” post. I wish everyone a very jolly weekend, and if you’re an American citizen, happy Independence Day!