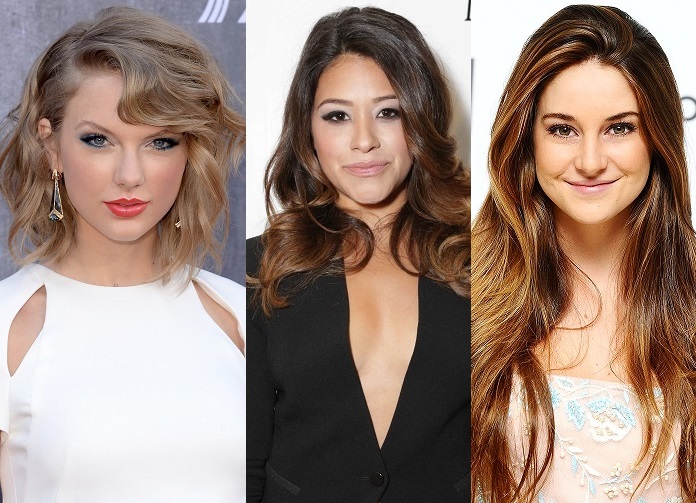 It’s become almost de riguer for red-carpet journalists (and others) to confront a female celebrity and demand to know whether or not she considers herself a feminist.

From what I’ve seen, most of the time the publication asking doesn’t have any vested interest in their answer (see, a Time magazine writer asking Shailene this question, and then another turning right around and putting “feminist” on their “words to ban” poll). This leads me to believe that these people aren’t confronting these women because they care about feminism, or want to help overturn some of the misconceptions about feminism– they just want headlines and clicks and shares, and they don’t really care how it happens.

Unfortunately, throwing “are you a feminist, huh, huh?” in a woman’s face seems to work for the whole “getting page views” thing that drives the capitalist internet—especially if she answers the question “badly”—if she says no. Things become even more interesting if she explains why she’s not a feminist, because it usually has something to do with misconceptions about feminism (“I don’t hate men” being one of the most common reactions).

And the reporter and the editor chuckle gleefully together and they take it to the presses and the misconceptions are reinforced and feminists have to waste more time explaining that no, that’s not what feminism is. I swear, we don’t hate men …

This bothers me because it’s not fair to do this to anyone, especially women whose entire lives are in the public eye and if they say “Yes, absolutely I’m a feminist!” they’ll be vilified and hated by some very disgusting people who are willing to harass and attack them for years, and if they say “no, I’m not,” a bunch of people (who, personally, I think are being a little bit ridiculous) get all upset with their sputtering “well, why not? DON’T YOU BELIEVE IN EQUALITY?!”

And that is exactly the problem, because anyone who isn’t an outspoken misogynist is going to respond with “well, of course I believe in equality!” At this point in our culture, I think it’s pretty rare for a person to consciously choose to believe that men and women should be treated unequally.

And while, at its most absolutely basic articulation, feminism is “the belief that the genders should be treated equally,” I feel that this definition is woefully unhelpful.

However, every single complementarian teacher will shout until they are blue in the face that what they teach has nothing whatsoever to do with whether or not men and women are equal. Of course men and women are equal, they’ll say—they are ontologically equal, and everyone is equally cherished by God. We’re just given different roles. That’s not a statement about which one is worthier than the other, or more valuable, they’ll argue. Pay no attention to the fact that men are the only ones qualified to be in charge of anything. That’s not inequality. That’s just our purpose.

To any feminist, that argument is nonsensical, but if you ask John Piper or Mark Driscoll if men and women should be treated “equally” they’ll say “of course!” but then saying well, that means you’re a feminist in response would be absurd because they are not.

There’s a really big idea shoved into the Merriam-Webster definition that rarely gets unpacked in conversations about whether or not such-and-such female celebrity says she is one or not.

Feminism is the belief that all genders should have equal rights and opportunities.

Inside of those words is a dizzying world of academic and social discussion, intersections of injustice and oppressions, conversations about race and gender and toxic masculinity and benevolent sexism and ableism and heteronormativity. Feminism is more than just the belief that men and women are equal, but how men and women and other genders live.

Feminists are dedicated to dismantling the systemic oppressions that affect women, especially the ones that we all tend to be unconscious of. We fight against internalized misogyny and the need many women feel not to be “One of Those Girls,” whatever those girls might be. We point to ways that whole career fields are hostile to women. We examine how gender roles and stereotypes affect all of us, no matter our gender, and how our communities police these things in sometimes brutal ways.

I don’t think it’s fair to demand that everyone self-identify as a feminist. To me, being a feminist is big work. It’s a commitment. Being a feminist means that when any one of my friends says or does something sexist, I am willing to say something about it, right then, on the spot, no matter the blowback and pressure I might face from others to “not make such a big deal out of it.” It’s a promise to constantly be educating to myself, to always listen to the experiences of women, especially women who experience a different set of intersectional oppressions.

I don’t want to appoint myself as some sort of feminist gatekeeper. Feminism is not a monolith. Feminism is an awfully big tent, filled with many people who can vociferously disagree because we are human beings and that’s inevitably going to happen. I, however, do wish everyone in the world would listen to feminists and think “hey, that makes a lot of sense!” and I’m hopeful that someday that dream will be a reality.

But, for now, there’s a big, uphill battle in front of all of us, and I don’t think handing over a note on the red carpet that asks “are you a feminist? check yes or no” is really helping anybody.

Recently, I was invited by a friend of mine to join Crown’s Blogging for Books, which I think is a fantastic idea mostly because I get free books. The first book I ordered was Michelle DeRusha’s Spiritual Misfit: A Memoir of Uneasy Faith.

The title resonated with me. I’ve always felt a bit like an outsider no matter what situation I was in, but most especially in church. There was always a part of me that wondered do I belong here, really belong? I still don’t have an answer to that question, but Spiritual Misfit helped.

If there was a single word I could choose for this book, it would be “comforting.” Michelle is approaching the questions I am struggling with right now with the perspective of someone much older. She’s been through a lot of what I’m going through, but now she’s on the far side of it looking back. I found a lot of value in that perspective, especially since Michelle is so honest about what it was like for her.

Another way to describe it would be beautifully ordinary. All my life I’ve never had to be told to “stop and smell the roses”—the simple wonders have always fascinated me, and it’s the small things I treasure. Cuddling with my partner while we watch Wolverine and the X-Men and munch on pumpkin loaf makes me so happy I could cry. Michelle’s book is filled with those kinds of moments—and her descriptions are delicate, but moving.

The thing that I appreciated the most about Spiritual Misfit was that Michelle’s approach to her faith is a bit like what mine is growing into. She emphasizes the importance of living your faith. The time in her life that the book focuses on was a time when she wasn’t sure if God existed, or if she had a “relationship with Jesus”—she saw other people having experiences that she didn’t share, and that was when I identified the most with Michelle. When other people are busy having spiritual epiphanies, I’ve been the skeptic silently observing, unable to believe in a reality I couldn’t seem to experience.

Instead of fixating on the intellectual questions, however, Micelle chooses to make her own “leap of faith” by trying to live by the teachings of Jesus. That decision makes so much sense to me, and it’s what I’m currently trying to embrace. I may never have a come-to-Jesus moment, but I can do my best to follow his teachings. She says something toward the end that I loved:

For a long time I was waiting for the perfect moment to declare my faith: the moment I had everything figured out, all the questions answered, the wrestling match finished. In the past I assumed my faith would “begin” when all my questions had answers, when I felt a certain way, when I acted in a certain way. I was waiting for all the pieces to fall into place so I could declare, once and for all, without a shadow of doubt, that I believed in God.

Part of me doesn’t really like that. Like Michelle, I am an intellectual person, and I crave order and understanding. I just spent the last few months studying Trinitarianism, and it was … unbelievably frustrating. The fact that 2,000 years later Christians are all essentially shrugging our shoulders about something that is supposed to be one of THE defining doctrines of our religion… yup. I do not handle that well. I’d rather believe in a heresy like modalism than have it be that nebulous and incomprehensible.

So the fact that Michelle has gotten to this point in her life and has never found the answers that I spend most of my time desperately searching for—makes me sad, while somehow, still offering me peace. I’ve been trying to learn to “live in the gray,” to accept that it’s the questions that matter, but that is difficult when everything inside is screaming but I want to know.

Spiritual Misfit is a book about living in the gray, of not just enduring, but embracing the questions. It was comforting, and peaceful, and beautiful, and funny, and touching, and honest. I’d recommend giving it a read.