stuff I’ve been into: October Edition

Last month I mentioned all the craft projects I was doing, so here’s a quick glance at some of the final results: 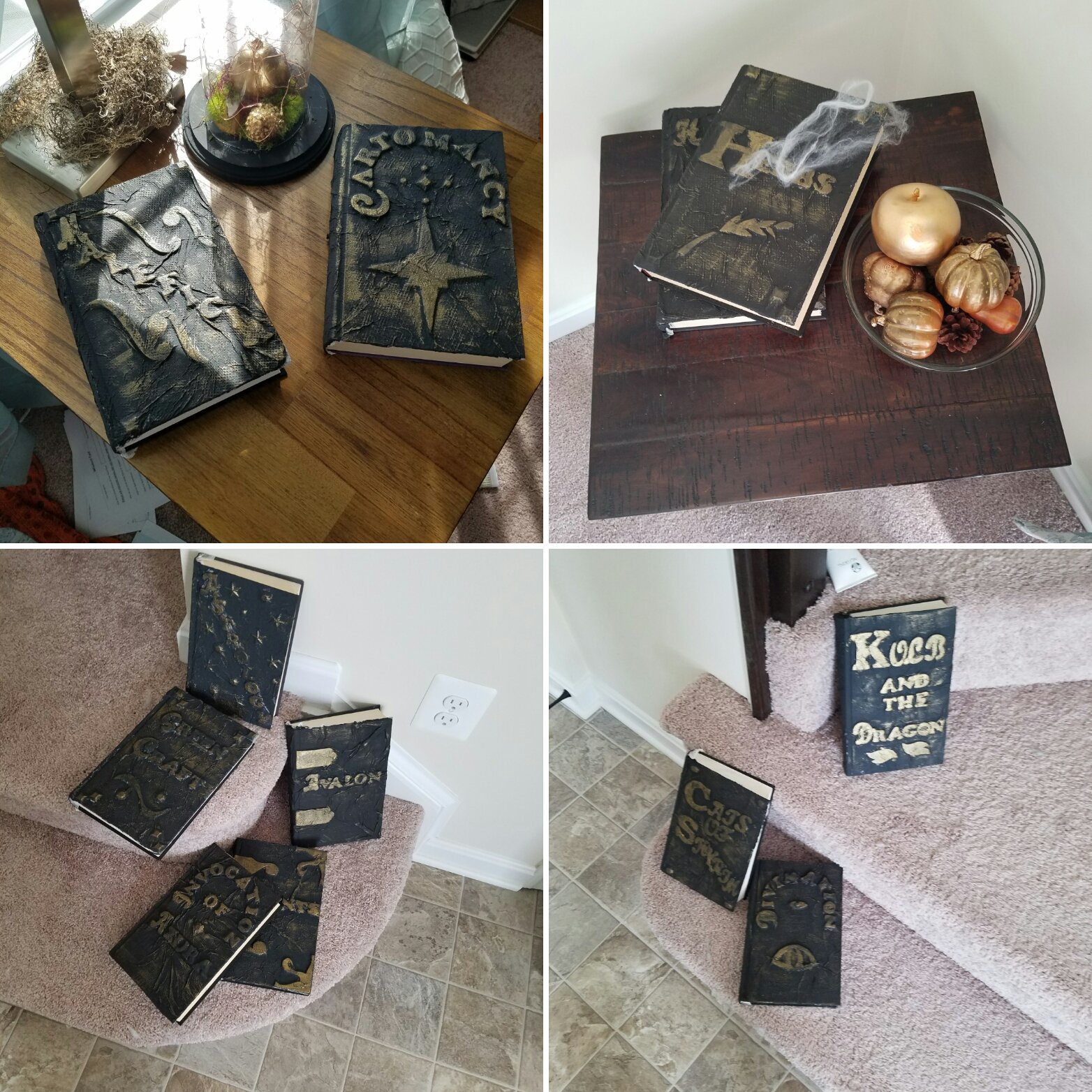 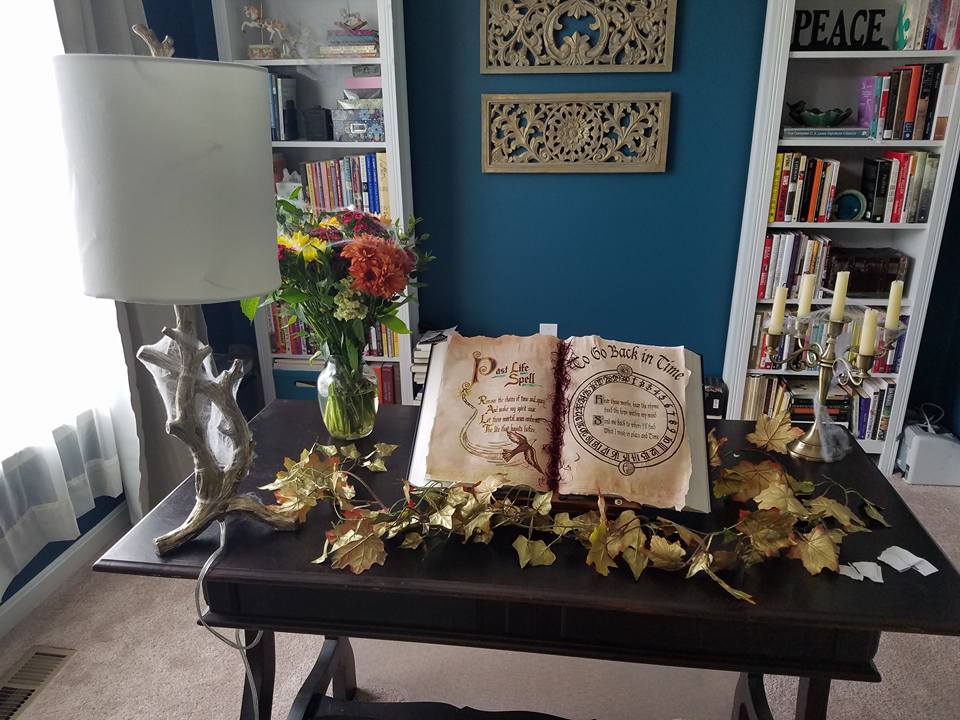 I was very happy with the way everything turned out, and I’m still delighted by the image of Tim LaHaye rolling over in his grave at the thought I turned his Left Behind series into witchcraft decorations.

I for one appreciate the fact-checking “fad” reporters are doing on politicians– it’s been far too acceptable for politicians to tell half-truths and lies for expediency’s sake, and I hope this trend of calling them out on it continues (although some people are apparently annoyed by it, which I don’t understand). However, this article by Soraya Chemaly highlights that fact-checking can only go so far in the endless tide of culturally-enforced misogyny in her article “Fact Checking is Largely Irrelevant Because Deceit is not What’s Causing Moral Outrage, Clinton’s Gender Is.”

In a class of articles that I call “explaining the obvious” we have for you this month “Women Negotiate for Raises as Much as Men. They Just Don’t Get Them” by Emily Crockett.

I’ve been following the crises Baylor has been experiencing because people discovered they were covering up rapes committed by their athletes and other students. It got worse this month when the Title IX coordinator resigned because she wasn’t being allowed to actually do anything (video at link).

“This is How They Broke Our Grandmothers” by Natasha Chart was powerful reading.

In the “women are wonderful and I love them” category, here’s “How First Ladies on Opposite Sides of the Civil War Forged an Unlikely Bond” by Hadley Meares.

I’ve mentioned before that the re-told fairy tale is perhaps my favorite genre, as are pretty much any books that are original fairy tales. Uprooted by Naomi Novik takes the cake in that category in my opinion. This essay from the editor of a collection of fairy tales (The Starlit Wood, which I now desperately need), Navah Wolfe is wonderful: “Wicked Girls Saving Themselves.”

This article, “Laughing Until we Cry: Conversations about Getting Flashed, Grabbed, and Gropped” by Liz Meriwether, has prompted a lot of thought for me over the last week. In it she asks us to re-consider how we approach the casual assault on our bodies that we can face almost daily.

We’re just about a week out from November 8, when all of this hullabaloo will hopefully be over. However, that doesn’t mean that this election cycle hasn’t exposed something important about American culture, and I think we need to understand what’s been happening and why. “Finally, Someone Who Thinks Like Me” by Stephanie McCrummen is a profile on a Trump supporter, and was interesting reading.

If you’re not aware of #NoDAPL and the Standing Rock protests, get aware. Everything I’ve been seeing makes me cry, and also absolutely bewilders me. It’s somehow still incomprehensible to me that I’m watching a dystopian novel acted out in the Dakotas.

“How To Talk about #NoDAPL: A Native Perspective” by Kelly Hayes.

“A History of Native Americans Protesting the Dakota Access Pipeline” by Alexander Sammon.

A linguist named Benjamin Bergen has written a book on swearing, which of course is relevant to my interests. He looked at what swearing actually does for people and to people, and found that hey! there’s a difference between swearing, verbal abuse, and using slurs! No kidding!

This story about faith healing exemptions, “When Religious Freedom Leaves Children Dead” by Emma Green, is necessary reading in my opinion. These exemptions need to be abolished everywhere because they are horrific. And keep in mind that many of the same people who are voting for Trump because “pro-life Supreme Court Justices” also think they deserve the legal right to murder their born children through vicious medical neglect.

Wicked Appetite by Janet Evanovich is, however, completely delightful. I’m not fond of the initial interactions between the two main characters, but it is funny and easy to read– something I need in between dense seminary texts.

Speaking of, if you’re interested in really understanding hermenunetics and how to interpret the Bible, Scripture as Communication by Jeannine Brown is exceptionally good.

I just watched the second part of Hunger Games: Mockingjay, and I enjoyed the movie better than the book. I don’t think the first movie adaptation went very well and Catching Fire was only slightly better than average, but the way that Mockingjay deals with everything the characters have been through goes better than in the book, I think.

I absolutely loved the first Jack Reacher movie so I was excited about the sequel Jack Reacher: Never Go Back. I know the title is from the book it’s based on, but the movie did not explain the “never go back” bit very well. Otherwise, though, it was a highly enjoyable beat-’em-up action movie and I liked the addition of a more substantive role for a woman than what we got in the first movie.

We’ve been watching Conviction because Hayley Atwell is in it, but so far I’m not impressed. The episodes so far have been incredibly formulaic, but I do like some of the characters. Tess Larson is especially intriguing. Hopefully the writers and the directors work out the early-season kinks soon.

Designated Survivor has been interesting because of its complete reversal on Kiefer Sutherland’s character in 24. He’s basically the anti-Jack Bauer in this show.

All my CBS shows are back, though, so yay! More Elementary and Madam Secretary for me. ABC, you need to step it up.