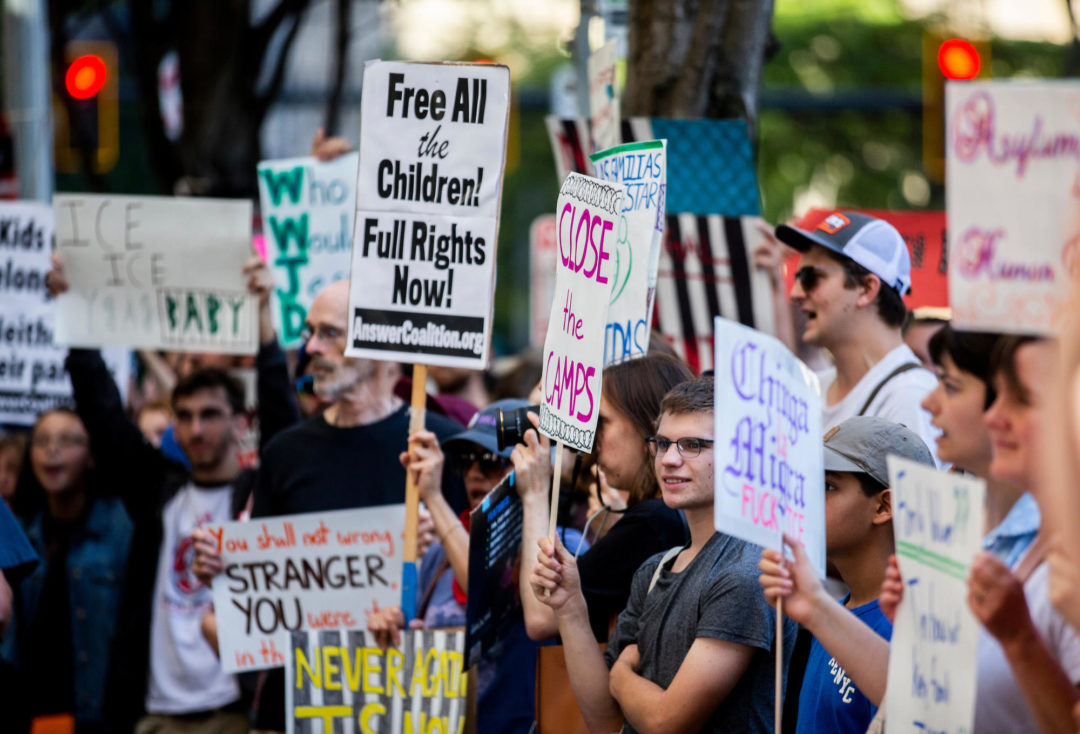 A few weeks ago I participated in a direct action intended to disrupt the business and daily activity at the national headquarters for Immigration and Customs Enforcement. The march was organized by Movimiento Cosecha and the #NeverAgainAction movement that has been protesting at detention centers operated by ICE or its contractors. I told a few people beforehand that I was going to be there, and some asked me a variation on the question “are you planning to be arrested?” My answer was always “no, I am not planning on being arrested.” I would then usually comment “the police have a choice. They could think y’know, they’re right, concentration camps are bad and decide not to arrest anyone.”

While there was some levity in my word choice, I was also telling the truth: it’s never up to me whether or not I’ll be arrested. That’s not my decision to make … and that’s also the point of engaging in a direct action like ours a few weeks ago or the one at Wyatt last week, where a captain chose to drive his truck into a line of peaceful protestors. Kelly Hayes said this better than I ever could:

This moment gives us an opportunity to reflect on what civil disobedience really is. It is not, as many believe, the act of getting arrested in protest. It is a form of direct action in which you are giving authority a moral choice. You have made your moral choice, and they have to make theirs. And you are telling that story in the open, or at the very least, in the context of a public narrative.

Sometimes, you will present authority with that choice and they won’t arrest you. Maybe they think it’s not worth the effort or the media exposure. Maybe you have the numbers. Sometimes they arrest you. Sometimes they show their character. And whatever they do, when it’s your action, their choices happen in the context of the story you are telling. Civil disobedience forces a confrontation between morality and that which would subdue it.

When I read that, as a Christian, of course I immediately remembered two of Jesus’ teachings: “you cannot serve God and mammon” and “whoever compels you to go one mile, go with him two.” As I sat in ICE headquarters, singing and chanting with ten other people, I was living out those words. My body sitting in that lobby was boldly declaring You cannot serve God and mammon. You cannot work for ICE, taking their money to enforce their policies, and be a moral person. Every word and lyric that came out of my mouth and echoed against every marble tile was deliberate resistance, carrying the soldier’s pack another mile.

Walter Wink talked a bit in Jesus and Non-Violence: A Third Way about the power of peacefully resisting domination and power:

Jesus directs his followers to go a second mile;

That was Jesus calling his followers and us to point out the abuses others make on us out of their power positions and not out of love. You point out to them where they are abusing you or the situation and you open them to the opportunity to learn and change and grow. That is a loving thing to do and sometimes it’s very hard to do because they accuse you of not loving them because you won’t do for them what you used to do.

Kelly Hayes and Walter Wink are hitting at the same idea, and I especially appreciate Walter pointing out that Jesus’ teaching on radical resistance to power was fundamentally about loving your enemy. After DHS agents had handcuffed us all and dragged us away from the windows and the cameras, they put us in a small room while they called DC metro police; several agents stayed in the room while they waited and we decided to continue what we’d been doing in the lobby: singing. One of the songs we chose was the chorus of “Which Side Are you On?” and as we sang we tried to make eye contact with each of the agents monitoring us. Look at us. See this, see the decision you are making. I knew it was unlikely any of them would intervene, but I hoped. I still hope that occasionally they think about that day and their role in it.

My small group–Bible study–book club has been reading through Brene Brown’s Daring Greatly, and last night we read a quote from Ken Robinson:

However seductive the machine metaphor may be for industrial production, human organizations are not actually mechanisms and people are not components in them. People have values and feelings, perceptions, opinion, motivations, and biographies, whereas cogs and sprockets do not. An organization is not the physical facilities within which it operates; it is the networks of people in it.

While Brown and Robinson are focusing on creating and sustaining emotionally healthy environments, this morning I connected the above quote with everything I’ve been mulling over since the direct action in DC. The DHS agents, ICE personnel, and metro police who eventually put us in squad cars and then locked us in concrete room without any water or food for twelve hours clearly thought of themselves as cogs and sprockets. My arresting officer even said something to the effect of “why did you have to make us do this?” and I just stared at him– I am not making you do anything, I thought,  and wow I know I’ve used “abuser” as an analogy for structural power for years, but that just really drives the point home, doesn’t it.

They view themselves as just a part of the system, just doing their jobs. It’s not up to them what happens, they’re just “enforcing the law,” they don’t set policy they just enact it … but the reality is that they’re not just wheels grinding away in a machine. They’re people, and they have choices about what they do.