stuff I’ve been into: winter edition

First up: my new blog feature of making blog recommendations. I’ve fallen a bit out of touch with the blogging community, and this is my solution to that, as well as starting to help build connections. We’re going to need that more than ever in the days to come.

Everyone, meet Bailey. She writes at her blog Ezer, which y’all know is a nod to ezer kenegdo and the big complementarian vs. egalitarian debate about “helper.” She reminds me a lot of me when I was first starting out. Obviously we disagree on some things, but her writing and thought process makes me want to engage with her– when I usually just want to rant at people about how ill-informed they are. It was a welcome experience.

I’m also very excited to introduce Zaynab, who runs the Queer Muslims blog on tumblr. Her twitter and the tumblr she runs are good resources, in my opinion, and I’m so happy to have discovered them.

I responded to Kate Shellnut’s “Women’s March Sets Out to Exclude 40 Percent of American Women” by tackling the misunderstandings driving the whole conversation and talking about the limits of “big tent” feminism. There was one part of Kate’s article that bothered me, but I didn’t have the time to really dig into since it needed an article of its own. Thankfully, Ruthie Johnson wrote on it: “Stop Appropriating Intersectionality.”

A colleague of mine wrote this, and I absolutely adore it because it made me Think New Thoughts. I present “Discourse in the Garden of Eden” by Amethyst Marie.

“Abortion is a Social Good” by Veronica Flores is not as well-argued as I would like (in the sense that her intended audience is already convinced abortion should be legal and accessible), but it’s a less abrasive presentation of this argument than many that I’ve come across.

“Judith the Activist” by Alicia Jo Rabins is a good introduction to this apocryphal character that we should all be better acquainted with. I’m a big fan of women weaponizing femininity because I have a dark sense of humor, so Judith and Jael have a special place in my heart.

I’ve known for a while that Monopoly was stolen from a woman inventor, but I had no idea how awesome her story really was. “Monopoly’s Radical, Anticapitalist, Feminist Origins” was a great read.

In the “things everyone needs to be aware of category,” we have “‘I Have to Text my Rapist’: Victims Forced to Parent with Attackers” by Thom Patterson. And yes, this even applies to fathers who were convicted of assaulting their child’s mother.

“Sometimes There are More Important Goals than Civility” by Vann Newkirk II is, in my opinion, incredibly well written and well argued. It does everything I want good argumentation to do– acknowledge the strengths of your opposition, the nuances in the argument, and then shred them all to bits. Respectfully.

If you haven’t read “White Evangelicalism is White Nationalism” by Fred Clarke, read it now and then bookmark it as a resource. I’m sure there will be a lot of conversations over the next four years where it will be relevant.

Not everyone is a literary nerd like me, so “In Defense of Facts” may not be the writing you’re looking for, but honestly William Deresiewicz is commenting on a broader trend than just John D’Agata’s A New History of the Essay. I don’t know how I ended up on the side defending Facts and Truth, but somewhat hilariously I am and I’m also arguing that everyone else should care about them, too. How I changed places with fundamentalists on this, I’m not sure I’ll ever know.

Facebook had been pushing The Magicians trailers on me for a few weeks, so I decided to watch the first season on Netflix before the second season aired. I did not regret it. Like most new shows it takes a bit for the writers/directors/actors to gel, but once they it got interesting. It’s being advertised as “Narnia meets Game of Thrones” which confused me at first until I figured out that “_____ meets Game of Thrones” doesn’t mean “______ meets epic scale or political intrigue”– it means “______ meets We Kill So Many People. So. Many.” Mostly it’s just very … whimsical yet dark. Like things are cute and light-hearted and a little bit quirky and then someone kills a puppy or a fluffy bunny rabbit and oh my heart. So– I warned you. It’s good, but may not be for everyone.

Also: massive trigger warning for the season finale, where there’s a rape scene. I trust the writers and directors and show runners not to ruin it for me and I think they’ll handle the storyline well, but it was really triggering … largely because of how well it was shot, interestingly enough. I’m not usually triggered by rape scenes because they’re usually … well, the “masked man in a bush, she fights and screams and kicks and also we’re going to make it seem a little bit sexy” variety. The one in The Magicians is much closer to my actual experience and what I think rape is actually like for many of the people who experience it. They don’t sexualize it, and it’s compassionately filmed … all of which made it difficult for me to handle. I think it does get one thing amazingly right: the character who is raped doesn’t fight, and doesn’t really articulate a verbal “no” in any way that I can remember … and it is still absolutely clear that her character is most definitely not consenting. For that one thing alone I can appreciate what the show did by including a rape scene. It’s clearly, unambiguously rape, but they did it without signaling that to the viewer in a way that reinforced rape culture.

I read Ender’s Game as a young teen, and that book shaped a lot of my experiences over the next eight years. I’ve read it somewhere around a dozen times– I’ve bought multiple copies of the book because I’ve worn a few out. So when Earth Unaware, a prequel set during the First Formic War, came out I was so excited. I read the first prequel trilogy over Christmas and then went to the bookstore to buy The Swarm the second I finished Earth Awakens. It introduces a new character, a Buddhist chemist, who is amazing. Most of the characters are amazing– Orson Scott Card and Aaron Johnston are doing a fabulous job.

I also really enjoyed The Invisible Library trilogy by Genevieve Cogman. It was delightful, and I’ve blown through each of the books. Each one has a different flavor– the first is solidly steampunk although I wouldn’t necessarily categorize the next two in the same way. It subverts a lot of tropes and it has a “magic” system that my writerly heart deeply appreciates. One complaint: Genevieve does the thing where her main character thinks of herself as “plain” but like three dudes and some ladies interact with her like they think she’s gorgeous, so blah. But otherwise I liked them.

I read Susan Dennard’s Truthwitch a while back, and I’m liking the sequel Windwitch just as much– sometimes second books aren’t as successful as first books, but I think this one is standing up to the promise of Truthwitch. I enjoyed Susan’s explanation of her writing process, too– “Writing Out of Order.”

Larkin and Erik K both recommended that I read Michella Sagara– and while the library never got her book in for me, the first book in Chronicles of Elantra was 99 cents recently so I downloaded it. Cast in Shadow was entertaining– I don’t usually read fantasy series that are intended to be a “monster of the week”-style story, but I’m enjoying the second book so far. Although, question for you two: where does Michelle go with the flower on Kaylin’s cheek (cough cough)?

I also convinced my dad to buy Terry Pratchett’s A Hat Full of Sky for my mother for Christmas … and then I read it. Because obviously the way I’m dealing with everything that’s happened since November is reading every book I can lay my hand on. A Hat Full of Sky was what you’d expect from Terry Pratchett: solid gold, and an amazing ending that manages to communicate Deep and Abiding Truthfulness without gettting preachy.

So what all have you been reading and watching? 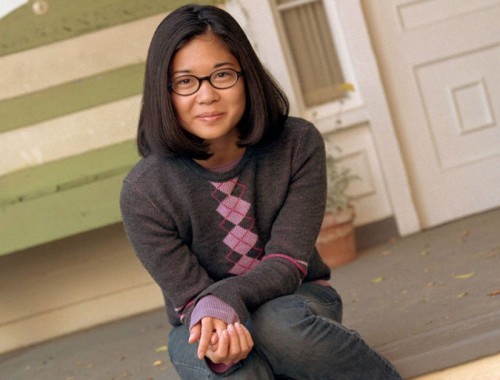 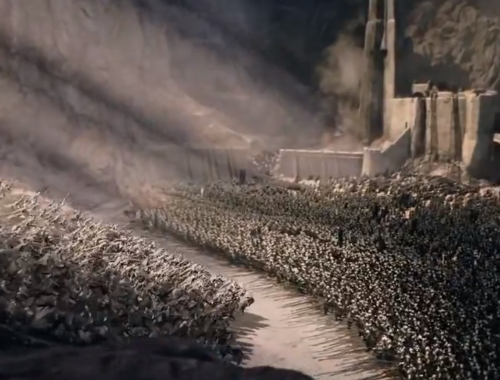 at dawn, look to the east