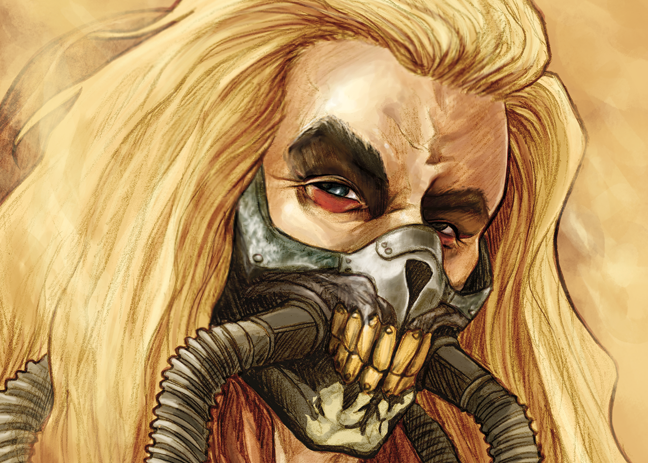 I grew up loving 80s sci-fi movies. From The Adventures of Buckaroo Bonzai Across the 8th Dimension to Enemy Mine, the more cheesy and outlandish the more I love it. Movies like Back to the Future and Ghostbusters were staples in our house. So, you can imagine I’ve seen the Mad Max films more than once (and yes, Beyond Thunderdome is as hilariously bad and wonderful as it sounds). When I first saw the trailer for Fury Road, though, I was all “meh” because I want my 80s sci-fi to be 80s sci-fi and it looked like they were making it all artistic and drama-y, which doesn’t really float my boat (the gender-flipped Ghostbusters, though, that looks like it is going to be awesome).

I was planning on eventually renting Fury Road, but when the MRA corners of the internet completely lost their shit over how feminist it was, I told my partner we had to go see it. I’m not usually one for post-apocalyptic car-chase movies, but Fury Road surprised me with how much I enjoyed it. There’s a lot of good things about it, and if movies about dystopian societies that feature flame-throwing guitars are your thing, you should watch it at some point.

There’s been a lot of interesting conversations happening on tumblr about Fury Road– like the fact that both of the main characters are disabled, or that it focuses on women saving and protecting women— and I’ve enjoyed them. However, after a bit, I started noticing a particular fandom spring up around the character of Immortan Joe.

If you don’t know anything about the movie, the following contains some insignificant spoilers:

Immortan Joe is an abusive, narcissistic, tyrannical, disgusting rapist. He created a religion where obeying him and glorifying him earn you a place in “Valhalla,” and he is completely obsessed with producing healthy offspring. He keeps a harem of slaves that he rapes anytime they are ovulating, and that’s the main plot of the movie. Furiosa is trying to get these women away from him, and they are willing to risk everything to escape. They refused to be a part of Immortan Joe’s “vision.”

The fandom centered on his character features artwork (like the one shown above by Mirva Pohjonen) and fanfiction, which is usually (from the things I’ve seen float through my feed) dubcon or noncon one-shots that feature humiliation/degradation and brutal abuse. One story that passed through my feed featured Joe fucking a woman’s face so hard he knocks her teeth out. Many people have already gotten Immortan Joe’s brand tattooed on the back of their neck.

Needless to say, this started a bit of a ruckus. One women condemned the entire fandom as being completely fucked up and offensive to all rape victims, which, of course, brought the response that there were rape survivors in the fandom and how dare anyone tell them how to “cope with their trauma.”

I’m not entirely sure where I stand on this issue, mostly because I think this depends on the people involved and where they are in their healing. Personally, I find noncon/rape fantasy stories disturbing, but I can understand how working through those emotions in the controlled environment of writing or reading fiction can be a constructive, healing process. I think that it could be similar to combat veterans playing through video games to treat PTSD.

I didn’t just realize “huh! I like being spanked during sex!” and run with it. I asked myself why. Why would I want to be hit during such a loving, intimate moment? Why do I get off on that? The answer was the above: because it doesn’t register as pain, necessarily. It is transcendent and freeing, and helps me to escape the daily drudgery of chronic illness. I love what my body is capable of doing, of experiencing.

This may not be true of every person– some people might be attracted to impact play because they have some internalized messaging about sex being “bad” and they have to be “punished” for having it. I’ve spoken with some people for who that’s true, so they decided to explore sensation and bondage play, but avoid things that are reminiscent of childhood discipline.

I’m also capable of getting off on power play. This is the “domination/submission” aspect, and is why I usually refer to myself as a bottom, not a sub. While it’s true that in a healthy, consensual BDSM scene the submissive retains complete control and power over what actually happens, on a personal level I don’t pursue that sort of dynamic in my relationship. When I asked “why am I turned on by domination?” I realized the answer wasn’t healthy– I was turned on by it because of how I react to being controlled. Domination and power play speaks to my personality, which is naturally fairly compliant with authority, and to how I was raised in an environment that demanded total obedience to men.

In short, the reason why domination would be attractive to me is that it reminds me of patriarchy, sexism, and religious totalitarianism. A therapist once told my mother that sometimes abusive dynamics can “feel like riding a bike” to survivors. Because it feels familiar and easy, we can be susceptible to further abuse without necessarily recognizing it. Domination is like that– it feels familiar, and therefore comfortable.

Which is why my partner and I agreed that it would not be a dynamic we explored. However, the same may not be true for every kinky relationship– without my particular set of baggage, domination may not be a problem for you. It could be simply another form of role play, something fun and sexy.

In the same way, the fandom surrounding Immortan Joe isn’t necessarily completely unhealthy. It could be a normal and productive part of someone’s fantasy life, but I feel that it’s important to be aware of ourselves when we’re attracted to characters like Loki or James from Twilight or Voldemort or Immortan Joe (or, for me, any villain played by Gary Oldman). We have to ask ourselves why.