thoughts on conservative Christian colleges from a Liberty graduate

There’s a bit of a hubbub happening this week over a certain announcement made during Liberty University’s convocation on Monday. If you don’t travel in the circles who are all abuzz about it, here’s the gist: Ted Cruz is the first Republican to formally announce his candidacy for the 2016 election, and he did it at Liberty, in front of an audience of thousands of college students. That’s not the newsworthy part, though– what has caught everyone’s attention is that this audience was a literally captive one. Liberty students who live in the on-campus dormitories are required to attend convocation (Liberty’s word for “chapel”), or they are fined. And some were not happy about being forced to attend a political rally.

I’ve never hidden the fact that I attended Liberty University for graduate school. In fact, on the whole, I believe my experience was a positive one, although I feel that way with certain caveats. I attended graduate school there, and therefore my experience was vastly different from anyone earning a bachelor’s. The English graduate department is, I believe, filled with highly competent professors and the academic environment is open to discussing anything (although I can only speak for the English department). While, if I had the opportunity to retcon my life I would never attend Pensacola Christian College or Liberty University, I do very much feel that Liberty was an excellent stepping stone in my life. It was good for me for where I was at the time– I was in an environment where my fundamentalist-indoctrinated brain/heart felt safe, but I was encouraged by my professors at every turn to get outside of that box.

However, there are some aspects about being a Liberty graduate that are … difficult. I’ve encountered HR professionals who claim that any resumé with “Liberty University” on it will go straight into the garbage– I’ve been personally turned down for things because of the colleges I have to list on mine. I’ve seriously considered paying for another graduate degree from a more respectable university and just removing PCC or LU from anything professional.

Because that’s the problem. Liberty University just isn’t respectable in most places, and they’re not doing graduates like me any favors when they invite people like Ted Cruz to speak during a mandatory event. It’s still very much Jerry Falwell’s school. I have been yelled at– actually yelled at– for daring to criticize some of Jerry’s more bigoted and hateful statements (like blaming the LGBTQ community for 9/11). I didn’t even say the words “bigoted” and “hateful”– I said they were “ridiculous” and got yelled at. By a professor. Not a professor I ever studied under, but still.

However, this whole situation is not entirely Liberty’s fault. Liberty is a conservative Christian college. It just is, and I don’t have a problem with the existence of conservative Christian higher education. They fill a certain niche desire, and I’m not going to fault conservative Christian parents or students for wanting to find a place that fits their ideology– after all, many people from all walks of life at least partly evaluate colleges and whether or not they want to attend based on questions like “does this institution align with my values?” The prioritization may change depending on the individual, but I know I look at places like the University of Michigan and think I want to go to there because of their reputation for student activism and an anti-military/industrial stance.

What does anger me are people who say things like “if I see a Liberty university graduate’s resumé, I won’t even consider them.” I went to Liberty University, and guess what? I’m a liberal, pro-choice feminist with socialist-considering-Marxism political tendencies. I think the Democratic party isn’t liberal enough. I’m almost of the opinion that capitalism (at least in its current cis-hetero-white-supremacist-patriarchal incarnation) is evil. Most conservative Christians would point at pretty much any thing I think about God, the Bible, and Jesus and start screaming “heretic!” and “burn her!”

I went to Liberty because of the circumstances of my life at the time. I enjoyed my experience there, and I, personally, learned a lot. It’s where I became a feminist, it’s where I started questioning biblical literalism. It’s where I took a class in dystopian literature and realized that books written by non-white dudes are spectacularly awesome. It’s where my Romantic literature professor asked me to read Frankenstein through a post-modern lens. It’s where another professor got so happy he cried when I was the first student he’d ever had to truly get the effect that Derrida had on Christian theology (we can thank fundamentalism for that one. I read Derrida like an Enlightenment-educated person would have in the 60s).

So for every person who mocks and dismisses and belittles anyone who graduates from a conservative Christian college, you can take your ignorance and condescension and shove it. 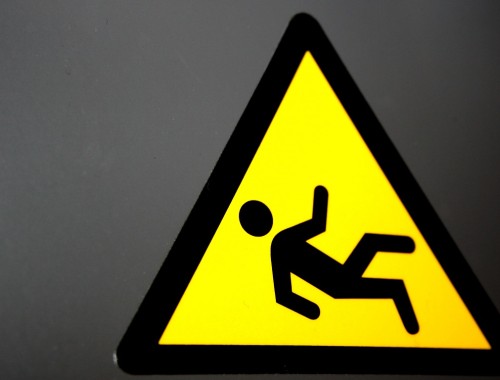