Christians understand your feelings better than you

As you all know, a little while ago I attended The Reformation Project’s conference, and it was an experience I appreciated and enjoyed. It wasn’t completely sunshine and roses for me, as Friday morning a couple protestors showed up outside the church. I ignored them every time I walked past until I was coming back from lunch and had an hour to kill, so I stopped to listen to a conversation one of the other conference attendees was having with the “leader” of the two.

I’m not sure how long I just listened, but eventually I got roped in and the other woman left after a few minutes. I stayed and continued to talk, mostly just asking questions because what he was arguing I found honestly confusing for a while. Eventually I figured out that he was saying “openly gay-and-in-a-relationship people can’t be Christians because it’s impossible for a Christian to live in unrepentant sin,” but that followed statements like “Christians aren’t proud,” which I found hysterical and really just said this man is a little out there and not living on the same planet as me.

There were even a few upsides to the conversation– it became clear to me early on that he wasn’t as familiar with the Bible as I am and that he couldn’t really deviate from his homophobic script much and that he also didn’t really understand things like cultural context very well. I think I even managed to get him to go “huh– I’ve never seen that before” at one point (I pointed out the “born eunuchs” passage to him, which I don’t think he’d ever read before while wearing his “I’m thinking about non-hetero-cisgender-conforming people” cap).

Eventually, though, my hour was up and I had to go in order to get to the panel discussion I was attending, so I started extricating myself from the conversation, and this is where our discussion went south in a hurry.

As I started to leave, he told me that the only reason I was leaving was that I was being convicted. I knew I was denying God’s truth, and I just wanted to avoid the pricking of the Holy Spirit on my conscience.

I honestly don’t know if what I did next was smart or not, but I’m a little proud of myself for being able to do it. I took my sunglasses off and looked him dead square in the eye and told him that no, I am not being convicted, I know what you’re doing, and that is not ok. And then I walked away, barely making it inside the church atrium before I broke down. I barely made it to the bathroom–my legs gave out a couple times– but I knew what was happening. I’d been triggered.

I was triggered because “you’re just being convicted” is one of the most powerful ways spiritual abusers controlled me for my entire life. And, as I’ve been thinking about what he said for a couple weeks, I’ve realized why that particular phrase caused the reaction in me that it did.

It’s an absolutely hideous thing to say to someone for a few reasons. First, when a fundiegelical is talking to someone, and they’re being a homophobic or sexist bigot, and the person they are talking to becomes frustrated or otherwise visibly emotional, a frequent go-to response is “you’re being convicted, I can tell.” They are completely confident that your response has nothing to do with them being mean or aggressive or even downright nasty and vindictive. It is not their fault if you become angry, even– that’s only proof of your “conviction.” It relieves the fundiegelical from any responsibility not to be an asshole. They can be an asshole all they want and when someone gets upset, they don’t have to feel guilty.

Second, it is erasure. I wasn’t actually upset with this particular person until he said this– I was just amused and then I had to leave because I was busy— but I cannot tell you the number of times I’ve been legitimately and appropriately upset and been told that I haven’t been hurt by their words, I’m just feeling the Holy Spirit. These people take my natural emotional response and say no, that is not what you are experiencing. I know better than you, and what you are feeling isn’t anger with me. It’s anger with GOD. I had a pretty simple motivation for leaving, like “my panel starts in a few minutes, bye,” but even if I had been upset with him, that would have been a legitimate reason for me not to want to talk to him anymore.

It is an odious thing to do. I am me, I understand what I’m feeling and most of the time I understand why I’m feeling that way. No one has the right to assume they know more about me than I do, especially a self-righteous stranger standing on a street corner. No one should ever erase someone’s motivations for an action and substitute their own. 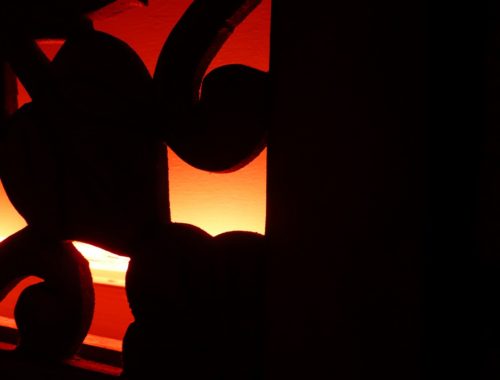