I wanted to write my last post today, finally discussing Christian fundamentalism in modern times, and how the orthodox belief of inerrancy has been largely abused by fundamentalism, or at the very least harmfully misunderstood.

That’s going to have to wait, because of where I’m at today. I already wasn’t feeling well (rapid changes in weather always give me migraines, and we have lots of nasty weather moving in for the next week), and I encountered an issue that I think needs my attention today, but I wanted to let you know what was going on, because I feel that this is an important issue that needs a lot of light.

No Longer Quivering, which hosts the Spiritual Abuse Survivor Blogs Network, occasionally runs some of my posts there, when the content fits into the material they cover. I very much appreciate the work that NLQ and the SASBN does, and that my story might be able to help others.

Last week, she ran my story on how the purity culture taught me that my rape was my own fault, that my rape was something that I needed to repent of. The discussion that followed was productive, I think, for the participants. We commiserated and shared our stories of the “object lessons” we heard growing up.

Samantha,
Thank you for the candid thoughts and illustrations regarding sexual purity and self-worth. I have been married for almost 29 years and have learned overtime the importance of love, oneness, and mutual respect. I believe we live in a fallen world that often is contrary to the three qualities I have mentioned. The Bible gives us many core principles for marriage and also leaves much to exploration and personal experience.

I am sorry for those whose personal experience has led them to doubt and challenge the Biblical principles for marriage. I am also sorry for those who have used vivid illustrations to warn of loosing your self-worth if those principles are violated. But…Jesus is our redeemer and the Bible is a message of redemption. While many of us have fallen from the Biblical standard for sexuality, if we repent and turn back to His guidance we can walk in the Light of His love for ourselves and our spouse.
Let me also say that if we look to Christ for our redemption and self-worth then who we are does not fade or fizzle through relationship or feelings…and will keep us looking for those who respect the dignity and Christ-worth that are ours because of what Jesus did for us at the Cross.

Thanks for allowing my two cents….
David Cuff

A lot of people reacted to the statements I bolded, and I feel for good reason. I believed that Mr. Cuff was being careless and inattentive, which is the case I made in my response:

I think you are intending to be supportive, but I’m actually really confused as to what you’re trying to say.

If you’re truly speaking about what I’ve written here, I’m really puzzled as to what you mean by “doubting and challenging the biblical principles for marriage.” I don’t think any of what I wrote has anything to do with marriage– and I don’t think I’ve presented a “challenge” to biblical marriage whatsoever. Your phrasing causes me to wonder why you’re automatically connecting “rape” and “marriage.” Assuming these two are connected is, frankly, incredibly disturbing to me.

You also talk about the abuse of the object lessons I was taught as a young woman as being representative of the “biblical principles,” and I also find that troubling. The object lessons have nothing to do with “biblical principles.” They are about threats. They are about telling a woman that she is property. And unless you’re reverting back to OT Law when the only thing that mattered about a rape was how much she was financially worth to her father, this is… wrong.

Granted, you may be approaching this from the concept that “virginity” is a biblical principle, which is… debatable, at best. The only time the Bible actually refers to consensual pre-marital sex (Ex. 22:16-17) the only thing that happens is either a) they get married, or b) the dude pays the virgin bride-price. End of story. No stoning. No moral judgment. And one of the few times in the NT that anyone talks about sex the terms “fornication” is used… which is pretty much a catch-all, and in some contexts could mean nothing more than prostitution.

Basically, please don’t assume that the Bible is “super clear” about this issue, when it’s… just not.

And, considering the context of my article, where I was talking about sexual abuse, violence, and rape, the line where you talk about “falling” from biblical standards, and a “need to repent,” uhm…. wow. This is incredibly damaging language. I didn’t “fall.” I don’t need to “repent.” I was RAPED. Repeatedly. I was sexually abused nearly every day. This is not “falling.” And maybe you’re not speaking about my article, in which case, I wonder why you bothered commenting on this article at all.

Granted, I was a little bit peeved and “hetted up,” but I still feel that my response was reasonable, especially considering the content of the article, where I was speaking about how language and words like his were used to hurt me and almost drove me to suicide.

After he didn’t respond or return to clarify, I checked out his blog, where his most recent article (as of April 14) was a “rant against cyber-bullying.” So, I read it, and felt that this must be a man who respects those who have been hurt– even hurt be people who have been hurt like words like his, or even written by him. I left a comment, which he has chosen not to approve, where I asked him for an apology, that his comment had not been respectful to my writing, and that his carelessness in his words were hurtful. I asked him to come back and clarify his original point in order to clear up what he meant– at the time, I assumed that the connection between “rape” and “needing to repent” had merely been accidental on his part.

Here’s what he wrote:

Wow….I have never offended so many people with what I thought was a short comment on Biblical Redemption. So, while not trying to justify myself or defend my new “bully” status I will try to address what I see as a misunderstanding.

First I never intended to offend any of you…especially Samantha the author. I simply wanted to point out a persons self-worth is not dependent upon prior abuse by others or their own failure (I did not suggest Samantha was a failure or had failed). I simply was emphasizing (I thought by way of encouragement) that The Bible Is A Book about redemption. And our lives can be redeemed from any abuse (ours upon others or others upon us).

I also wanted to reiterate what I believe is the standard of Biblical Sexuality (sexual purity with one man and one woman) doesn’t change from opinion and experience or even abuse. We live in a fallen world and there is much pain and abuse going on but Mutual respect, oneness and love are God’s design and I believe the N.T. gives plenty of guidance for Marriage relationships. I have personally abused and have been abused (yes even happens to men sometimes) prior to being redeemed by Jesus through my own repentance and trust in His finished work on the Cross for my sins.

If after ready my response you desire to send more negative comments my way…chill please! Sometimes you can disagree agreeably…

And here’s where I get angry.

Because he employed a tactic I’ve seen so many countless times from every single abusive pastor I’ve ever encountered.

The first paragraph of his response is complete and utter dismissal. He’s so shocked that we pointed out a potential wording of his that could hurt people. He just does not understand how his “short comment,” which was just so supportive, could have been perceived as hurtful.

This is called spiritual abuse.

Because he’s a pastor, talking about “biblical” concept, and he has the truth, which “doesn’t change from opinion and experience or even abuse.” My hurt, how his words hurt me, doesn’t matter at all. Because he’s right, and he has the Bible, and all he’s doing is telling me that I can be “redeemed.”

And then he pulls what he probably sees as a trump card: he’s been there, right there with me. He’s been abused– but guess what helped him overcome his abuse?

REPENTANCE and TRUSTING IN THE CROSS TO FORGIVE HIS SINS.

The connection I very naively assumed was an “accident’? Not an accident at all.

He really does think I need to repent and trust Jesus to forgive me for my rape. 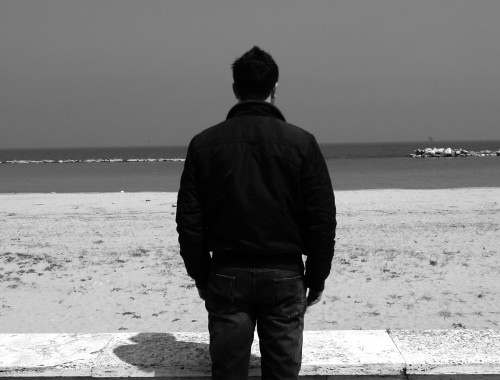